Chili peppers have been a part of the human diet in the Americas since at least 7500 BC. There is archaeological evidence at sites located in southwestern Ecuador that chili peppers were domesticated more than 6000 years ago, and is one of the first cultivated crops in the Americas that is self-pollinating. Chili peppers were domesticated at least in different parts of South and Central America. Christopher Columbus was one of the first Europeans to encounter them (in the Caribbean), and called them "peppers" because of their similarity in taste with the Old World black peppers of the Piper genus.  Chilies were cultivated around the globe after Columbus. Diego Álvarez Chanca, a physician on Columbus' second voyage to the West Indies in 1493, brought the first chili peppers to Spain, and first wrote about their medicinal effects in 1494. From Mexico, at the time the Spanish colony that controlled commerce with Asia, chili peppers spread rapidly into the Philippines and then to India, China, Korea and Japan. They were incorporated into the local cuisines.

Lots more of cool historical information about Chiles can be found by clicking on the Wikepedia logo...Enjoy! 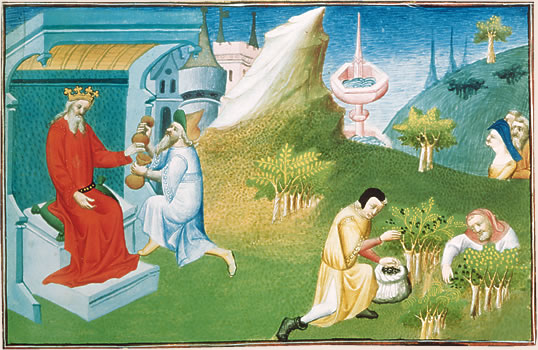 Alexander the Great is believed to have brought dried black peppercorns back from India. His travels brought back also its Sanskrit name, pippali, from which, via Greek and Latin, we derive both our word for the spice and the plant’s scientific name, Piper nigrum.

Pepper was once a gift fit for kings; to the right, a French manuscript illustration from the early 15th century shows both harvesting and royal presentation.